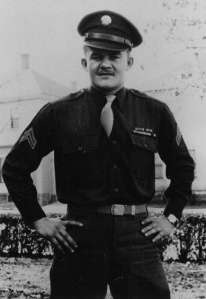 It was a typical Sunday morning breakfast, for the first weekend after payday. At least a third of the Company was not home. Another third was still in bed asleep. But the last third more than made up for the absences in the loudness of their drunken laughter and horseplay and the clashing of cutlery and halfpint milk bottles.

Warden was just going back for seconds on both hotcakes and eggs, with that voracious appetite he always had when he was drunk, when this blast shuddered by under the floor and rattled the cups on the tables and then rolled on off across the quad like a high wave at sea in a storm.

He stopped in the doorway of the KP room and looked back at the messhall. He remembered the picture the rest of his life. It had become very quiet and everybody had stopped eating and looked up at each other.

“Must be doin some dynamitin down to Wheeler Field,” somebody said tentatively.

“I heard they was clearin some ground for a new fighter strip,” somebody else agreed.

That seemed to satisfy everybody. They went back to their eating. Warden heard a laugh ring out above the hungry gnashings of cutlery on china, as he turned back into the KP room. The tail of the chow line was still moving past the two griddles, and he made a mental note to go behind the cooks’ serving table when he bucked the line this time, so as not to make it so obvious.

That was when the second blast came. He could hear it a long way off coming toward them under the ground; then it was there before he could move, rattling the cups and plates in the KP sinks and the rinsing racks; then it was gone and he could hear it going away northeast toward the 21st Infantry’s football field. Both the KPs were looking at him.

He reached out to put his plate on the nearest flat surface, holding it carefully in both hands so it would not get broken while he congratulated himself on his presence of mind, and then turned back to the messhall, the KPs still watching him.

As there was nothing under the plate, it fell on the floor and crashed in the silence, but nobody heard it because the third groundswell of blast had already reached the PX and was just about to them. It passed under, rattling everything, just as he got back to the NCOs’ table.

“This is it,” somebody said quite simply.

– James Jones, From Here to Eternity

This entry was posted on Wednesday, December 7th, 2011 at 7:48 am and is filed under Events. You can follow any responses to this entry through the RSS 2.0 feed. Both comments and pings are currently closed.